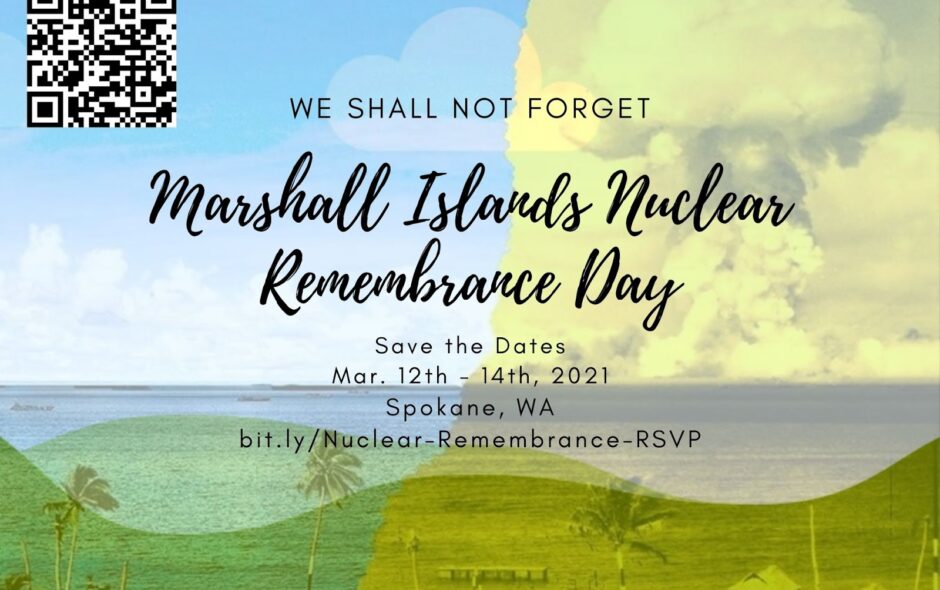 Some months ago I hung a world map as my shower curtain. I wanted to visualize the places I have traveled, the places in the news, and the regions where military tensions and potential nuclear weapon exchanges or accidents might take place. A two-fold objective: pleasurable memories and frightening possibilities. 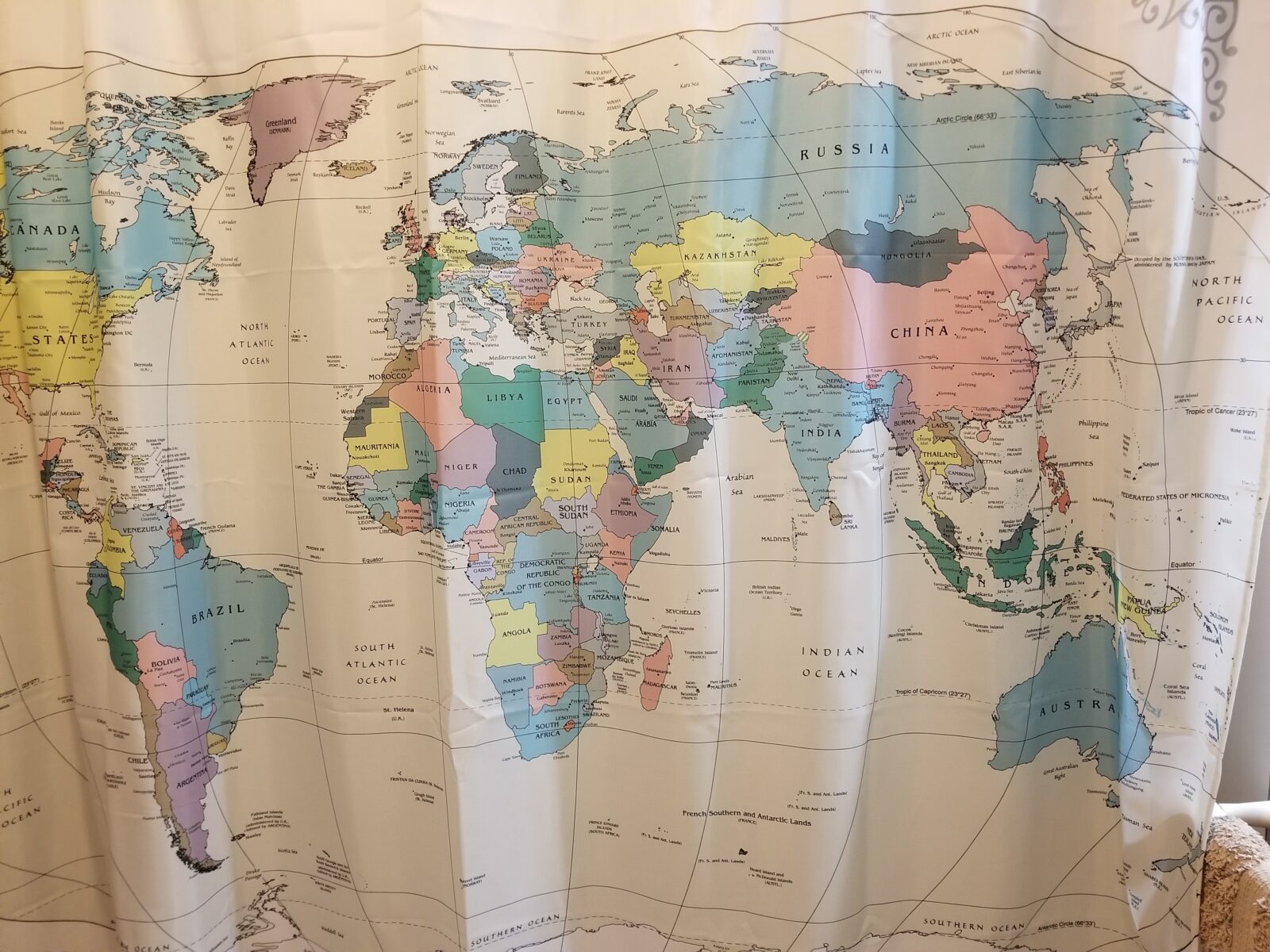 My work on the Washington Physicians for Social Responsibility’s task force provided incite into a previous unknown [to me] world: the Marshall Islands, their people, and the use our government made of this tiny archipelago as the testing site for our hydrogen bombs in 1954.

I searched my plastic map for the Marshall Islands scanning the South Seas from my seat or waiting for the water to run hot before stepping in the shower. I never found them.

Yesterday I googled the Marshall Islands, took longitudinal and latitudinal eye-ball measurements removing any doubt about where to look. The island nation did not exist on my large and detailed map. Overlooked on my shower curtain map. Overlooked in the national consciousness of Americans, and perhaps the world. [I have taken my Sharpie and drawn them in, on the end seam where the roundness of the Earth splits to make a flat map.]

Two years ago the population of the island’s sovereign nation was 58,400. Tyson Foods in Arkansas employs many Marshallese from the 17,000 member community living there. In Spokane, Marshall Islanders makeup 1% of the population (and account for 33% of the Covid-19 infections). Many live in Hawai’i.  Their difficult history may be new to you.

On March 1st, 1954, the United States’ most powerful hydrogen bomb, with a 15 megaton yield and code-named Castle Bravo, was detonated upon Bikini Atoll – Marshall Islands. To this day, generations of people are without home and food security, and many face generational health disparities. But not even weapons of mass destruction can destroy Marshallese culture. The Marshall Islanders in Washington State are well organized and have not given up hope of getting access to health care, Medicaid, and other health services.

They live in a strange limbo resulting from a deal their government made to the US: to give our US military access to their islands for weapons’ testing and the creation of military bases in exchange for their citizens to obtain visas to live and work in the US, earn money and pay taxes. But, this is a big BUT, a Marshall Islander living in the US is not qualified to receive any of our social safety net provisions such as social security. To understand their limbo status better, read this article from the Spokane Tribune.

Since 1986, the Compact of Free Association (COFA) between the Republic of the Marshall Islands, the Republic of Palau, the Federated States of Micronesia (Chuuk, Kosrae, Yap, Pohnpei), and the United States allows COFA citizens to serve in the U.S. military and enter, lawfully reside, and work in the U.S. in exchange for providing the U.S. exclusive military control of the region.
When the Compacts were originally signed, COFA migrants were eligible for Medicaid and other federal programs. That eligibility changed with a new law in 1996, when these and other migrants were excluded from benefits. 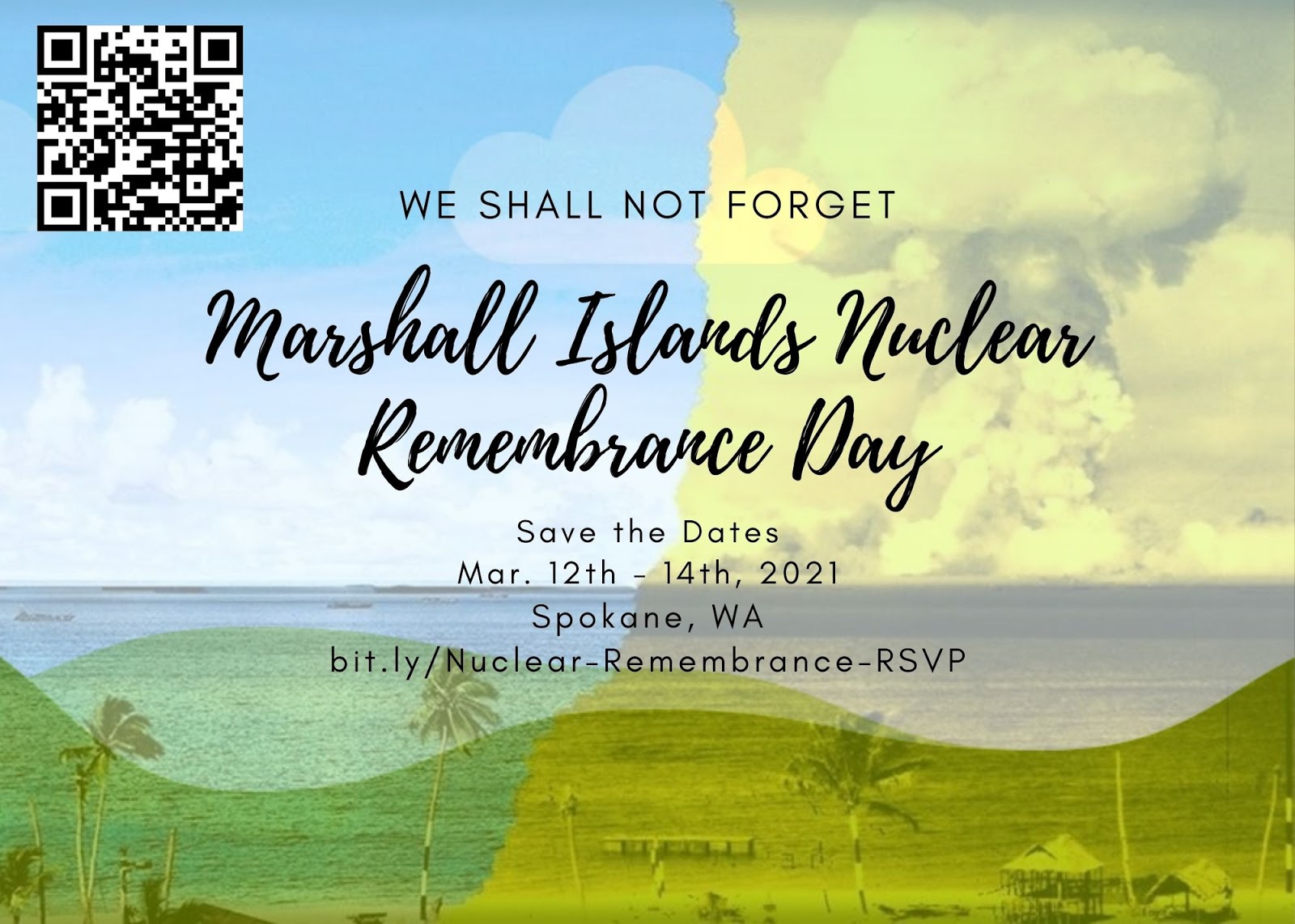 The WPSR has been instrumental in making the Marshallese presence and plight visible to the rest of us living privileged lives in Washington State. They was us to celebrate their resilience in the face of their circumstances.

Put this date on your calendar, March 12-14, 2021, In Washington, the Marshallese and nuclear frontline communities welcome us to attend the 2021 Marshall Islands Nuclear Victims and Survivors Remembrance Day. We will remember the legacy of the nuclear era, the resilience of nuclear frontline communities coping with today’s pandemic, and the crossroad of nuclear and climate change justice.

Is this news to you? Any reactions you would care to share? Please comment. If you have read this, you will be changed and become more aware of the need to abolish all nuclear weapons, their manufacture, their storage, and you may even join the efforts of WPSR.

Your donation helps support their lobbying efforts to change the nuclear landscape and the cost of maintaining it.

Thanks for reading. Google.map Marshall Islands and form your own mental image of this one-time island paradise’s place in the vast Pacific ocean.

For a Nuclear Free World, Betsy

My next public appearance will be hosted by the Anacortes peace activists No More Bombs in February. Watch this space for date and time and how to participate. https://www.nomorebombs.org/