I’m one of them, an aging peace activist. Wake up, everyone. We have a massive nuclear arsensal deployed at the Bangor nuclear submarine base just 20 miles from our Aquarium on the Seattle waterfront. Does anyone care? Ron Judd wrote a thorough and inspiring article about the threat and what is being done world wide to reduce that threat. These good news stories don’t make the main stream media.

Friendship, not fear is what we need. A New York City guy commented on Judd’s article in the PacificNW Magazine last Sunday . He said the Chinese and Japanese own half of Mahattan so there was little danger of them starting a nuclear war. They’d lose their assets.

Get our school children and our musicians, our cooks and our doctors, our educators and our athletes to travel beyond those borders. Let the North Koreans see we don’t have horns and sharp teeth. Friendship between so-called enemies will influence angry fist-waving leaders.

We did it once. We can do it again.

This weekend marked an important day for the anti-war movement. One year ago, on July 7th, 2017 the UN adopted the Treaty on the Prohibition of Nuclear Weapons (TPNW). Well over a hundred countries voted in favor of the Treaty; the countries abstaining all have nuclear weapons.

The Nuclear Non-Proliferation Treaty (NPT) recognize China, France, the Russian Federation, the United Kingdom and United States as possessing nuclear weapons as well as the four (India, Israel, Pakistan and North Korea) which have acquired such weapons without being party to the NPT. Most of these states did not even participate in the treaty negotiations.

Don’t let this refusal to consider the ban get you down. It feels as though we are in a worse state of emergency than at the time of the events in my book, Open Borders. In fact, the Doomsday clock has been moved closer to midnight. (It was set a 4 minutes to midnight in 1981 after the Soviet Union invaded Afghanistan and U.S. President Jimmy Carter pulled the U.S. from the Olympics in Moscow.)

The coalition of organizations world wide called ICAN are coming up with some pretty original ideas about how to capture the attention of the countries with a nuclear arsenal. More about that in the coming posts.

Today I want to celebrate the birthday of this audacious move involving the United Nations by telling you that Costa Rica just ratified the TPNW Treaty on the Prohibition of Nuclear Weapons. The total signator countries is 59; the total countries who have ratified the treaty is 11. Ratification means the democratically elected national assembly of Costa Rica voted to ratify.

I haven’t seen reference to this action on the internet but from what I know about Costa Rica’s gradual reduction of dependence on the US and the recent election of a progressive president, this ratification could be seen as a “nose-thumbing” gesture toward the US administration’s escalation of nuclear threats. Good for them.

Take a listen to this MyNorthwest story from late fall last year. You get my voice as Felix Banel interviews me about Target Seattle and Citizen Diplomacy in the 80’s. 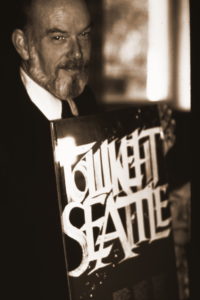 I’m getting involved with Washington Physicians for Social Responsibility, one of the sponsoring organizations that kicked off Target Seattle’s public education events in the 1980s helping our local citizens understand the dangers of nuclear war. As informed people, we have the power to take action. WPSR is re-kindling actions to prevent nuclear war today. Take a look and take action.

In faith for our future where all people respect all other people and work to insure peace,

I recently received an email from the author and writing teacher who launched me on this writing path, Natalie Goldberg.

On Wednesday, February 7th, I went to Upaya Zen Center [Natalie lives in Santa Fe] and listened to Kaz Tanahashi’s dharma talk.  He talked about war.  He lived through WWII in Japan.  He is very afraid that by November we will go to war with Korea.  37% of democrats and over 80% of republicans are for it.
After the talk, I came home, took an old pink pillowcase, and painted “no war.”  The next day, a friend came and helped me wire it up to my stone wall, facing the street, on Cerro Gordo.  No war.  We just cannot do this with Korea.  No atom bombs.  Please let’s do all we can to prevent war.  The simplest act–the “no war” pillowcase sign–counts.  It’s a solid statement of our stance against destruction, and a solid declaration of our love and respect for earth, for our fellow human beings, those we hold close to us and vow to protect, friends we’ve kept in touch with and those long gone, and the strangers we sit next to on the bus to work, or that one stranger Katagiri who a long long time ago boarded a plane from Asia, settled in Minnesota, and shared zen with me, with America.
Let’s heed the call, take a stand together, and make and display our “no war” sign.  Share an image/s of your sign.  Share this call to action with friends;  post on social media.
Thank you, Natalie, for your inspiration.
We need to do what so many of us did in 1980: search for the truth about this new threat to our planet. Target Seattle was such a movement. Perhaps the rejuvenated and re-dedicated work being done by Washington Physicians for Social Responsibility is the way to go.
I made a pillow case sign myself and hung it beside my mail box.
Join me. Betsy