Preview(opens in a new tab)

Between Christmas and New Year’s Day is a good time to clean old files and organize the office. Opening a full notebook of writing from 2016, I find an assignment from Scott Driscoll’s UW class in Literary Fiction. Write an “Observer narration”.

Citizen Diplomacy: Observer Narration Week 4, 1/28/2016.  If you haven’t picked up a copy of Open Borders yet, this will give you a taste.  In Open Borders, a memoir, the reader gets an accurate account of the two events, one in Moscow and one in Tashkent. This sketch is dramatized somewhat for the purpose of the exercise.

He was ahead of us, a group of twenty-nine peace activists traveling from Seattle to the USSR in 1983.  We were moving through a gleaming subway station in Tashkent, Uzbekistan.  Aldon Bell strode, as he always did, with confidence, his attaché case tucked tightly under his left arm, his right gesturing as he talked with Masha.  Masha was his personal interpreter, a student from the University of Washington who lived and breathed Russian.  Her halo of curls and his baldpate tipped together, bobbing along, side by side just far enough away from the Russian interpreter to avoid being heard.

We were traveling as tourists under the strict and constant surveillance of Soviet authorities.

We had entered the country from Helsinki, landing in Moscow.  Don, as we all called him, navigated the immigration seamlessly.  Even though each of us carried a manila envelope stuffed with letters to the citizens of our sister city, Tashkent, and signed by over 30,000 well-wishers, he moved us past suspicious guards by carrying a slim volume of Pushkin, visible to anyone whose job was to notice.

His open blue eyes and careful goatee, his lean face and broad shoulders (he’d been a rower at Oxford), his average height and slim waist made him a dead ringer for Lenin.  You couldn’t help notice it when he stood waiting for his luggage, his face silhouetted against the proverbial portrait of the most favored leader plastered on the airport chamber’s walls.  The youthful security forces had to have noticed the likeness, too. 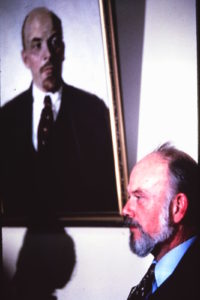 He did well in the formal interrogation with some high official in Moscow, all of us sitting around the outside edge of a horseshoe table with simultaneous translation going on.  I had knots in my stomach and thought I might lose my lunch, but he, he remained calm.  His face had a shy smile, but could turn into a grimace, lips curling, and the gap in his front teeth adding a fierce quality to his words when called for.  The forty-five minute counterpoint between the two men moved from platitudes, to arguments about the Freeze Campaign and Unilateral Disarmament neither of which we favored.  With Masha whispering her own interpretations of the Soviet officials challenging remarks, Don held his own.  At least from where I sat, he seemed to be doing well. Don tended to be pessimistic before hand, expecting things to go badly if they could.  In the moment, his manner and words displayed a kind of Ben Franklin diplomacy, declaring nothing certain, open to whatever might unfold.  Never belligerent. And belligerent was certainly the way the Soviet spokesperson sounded.  Our guy, I observed, was coming out even, maybe a little ahead.

“We come in peace.  Our governments speak angry words.  We can speak kind, personal words to each other.  We love our country as you love yours.  We want to see our children grow up and marry, as do you.  As people, we can know each other and wish for each other’s happiness.”

Our reception in Tashkent was more relaxed.  We were away from the intensity of the Moscow stage.  As we following Don, striding out of the Tashkent subway station—it had been emptied of normal crowds “for our protection”—we burst into the bitter cold of early March.  I watched him wondering how he would assess our next venue.  His face was passive, slack jawed, relaxed full lips, eyes scanning like an owl, without movement.  I alone knew he was carrying messages of encouragement and hope to the Refusenicks rolled tightly into the empty film canisters and tucked into his coat pockets.  My teeth chattered as much from fear as from the cold as I wondered how he could maintain such equanimity.  Before returning to the US, we would find a way to deliver them to desperate people.  If caught, our mission would end in disaster.  Did he imagine the consequences and simply override them?  From where I stood, it seemed so.  He always dissembled well.  No one could guess his thoughts.

The square the subway emptied into was full of people, two or three deep on three sides, facing a podium.  The crowd parted to let him, Masha and our official interpreter and guide through.  I took my place with the others dispersed in the crowd and kept an eye on Don.  He seemed nonplused by the numbers of onlookers, some on the surrounding rooftops, the array of stout, heavily over-coated men standing of the platform.

Suddenly Masha pulled his sleeve.  He leaned his ear toward her.  She must have overheard some news that could impact us.  Seconds later I saw the blood run from his face, his jaw clench; his eyes fly open and then narrow to slits of purpose.  Something was terribly wrong.  A couple of the others in our group noticed the change in Don’s demeanor. I didn’t take my eyes off him as the proceedings opened with a bombastic speech by a highly decorated veteran.  While the official translator repeated the soldier’s triumphs in war against the Germans as an ally of the United States, I watched Don fumble with his attaché case.  He pretended to listen, but I could see he was working out how to handle some seriously bad news.  None of us spoke out of respect for the proceedings.  We all knew Reagan was planning a major speech on the state of the Cold War.  We hoped against hope that he would wait until our return.  The State Dept. had warned us about the folly of such a trip.  Don assured them we were tourists under the auspices of Holiday Travel in Seattle and nothing more.  They gave us all the necessary visas.  Something terrible must have happened.

The old soldier ended with a few clenched fist thrusts and moved to one side as the crowd applauded.  Don seemed to hold his breath as a Soviet official took the podium and began speaking in a menacing tone as if to whip up the crowd against the Americans in their midst.  His task was to welcome us and introduce our leader whose speech was the main attraction.  We were the reason so many students and housewives responded to the unofficial command to assemble.  As I watched his face, the twitch in his jaw slowed down.  His shoulders began to drop.  He took out a handkerchief and blew loudly into it, folded it again into its square with the precision of an altar guild lady.  The handkerchief made its way into his rear pant’s pocket.  Then he took off his glasses and polished the lenses with the inside of his silk tie, methodically inspecting them before adjusting them on his nose.  A familiar ritual of making himself ready.  His cheeks inflated slightly and then his breath released, long and far reaching.  The speaker paused, gestured with a flat pudgy hand to punctuate his badly pronounced Aldon Bell, Professor.  All the while, the Soviet functionary kept eye contact with the expectant crowd.  He then turned to Don, shook his hand and guided him to the microphone with a firm hold on his elbow.

I knew he would not fail, that whatever nonplussed him moments ago would become a launching point for his message of cooperation, but my heart was in my mouth.  I did not breathe until his first words rang out.

“We come to bring greetings to the people of Tashkent, Seattle’s Sister City.  Tashkent and Seattle are far from the seats of government that manage our affairs and speak to world leaders about our differences. We come not to debate these affairs but to share our worry for the future of our remote cities, for the future of our families, for the beauty of the land we each call home.”

His voice was clear and strong.  He paused for the translation.  Faces, stern and suspicious, began to melt.  A cluster of older babushka, grandmothers with fringed scarves around their heads, began to weep. Some of the students turned to look at us standing next to them, and nodded in sympathy.  We Americans relaxed our collective brows.  His shy smile and the way he dipped his head to divert attention from himself won over the onlookers.  He simply ignored whatever had happened on the world stage that inspired the Soviet official’s angry speech.

That night in the privacy of a spacious hotel suite, we discovered the awful cloud that threatened to shroud any hope for mutual understanding.  Reagan addressed the National Association of Evangelicals one day earlier on March 8, 1983, declaring the Soviet Union an Empire of Evil that had to be overturned.  Those men on the podium expected Don to follow his president in condemning Communism.  He did not.  We lifted our shots of vodka with relief.

To order Open Borders, go Amazon page and they’ll ship one out to you. You can also order from your favorite Indiebound local independent bookstore. Thank you for reading. Please pass this along to history buffs who are digging into the Cold War. And to people who need inspiration for the threatening nuclear weapon buildup of 2019. Betsy Bell Author betsy@betsybellauthor.com