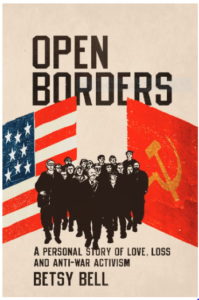 Want to be the first to read Open Borders: A Personal Story of Love, Loss and Anti-war activism? The various online ways to order the book are now ready to respond. You can pre-order Open Borders now. I’ve got my very own ISBN 10-1941890210.

Amazon– to place an order through Amazon, open your Amazon account and type in Open Border by Betsy Bell.

If you like to support the independent book sellers, you can go the the Indie books hub and pick your favorite store.

Elliott Bay Books in Seattle has it available for pre-order.

Barnes and Noble has Open Borders in their catalog.

To prepare you for the questions you’ll be asking yourself as you read and finish the book, here is a list of questions for readers found in the back pages. Pondering them may encourage you to read the book with friends and think about the issues beneath the story line.

Open Borders tells the story of direct conversations between citizens of two nations considered hostile to each other. The intent was to break down walls between nations.
• How do you view this type of action in the current political environment?
• How do social media interactions compare to face-to-face conversations?
• Do you believe the actions taken were effective in furthering peace? Nationalism and ethnic isolation are on the rise around the world. The author advocates freedom of movement across international boundaries and the vital importance of human connections between citizens of different nations.
• In our current political environment what challenges do you see to this approach?
• What nations would you put at the top of your list for organized civilian action?
• Would terrorism and personal safety issues prevent you from visiting Russia? Iran? North Korea?
• Do you see value in isolating another nation?
Like many women of that time, the author struggles with her role as a wife and a mother and her desire to have a career.
• Many more women work outside of the home today, but is this challenge a thing of the past?
• Have you or someone you know struggled with similar issues?
Moral purpose guides the author and her husband as they become deeply involved in the local efforts to reduce the nuclear threat between the Soviet Union and the United States.
• What principles guide you?
• Have your principals driven you to unexpected social or political action?
• How have you responded when a principled action puts you into conflict with someone you respect?
• How might you resolve those differences?